September 1913, one of W B Yeats most famous poems, will be familiar to many people. It’s haunting refrain, “romantic Ireland’s dead and gone, It’s with O’Leary in the grave“, was a comment on Irish life and society at the time of the great Lock-out and not without resonance in more recent times. Yeats, of course, besides being a poet of world renown was also a politician in that he served in the Irish Senate for two terms and made effective use of his time in that chamber.

This stamp was issued in 1965 to mark the anniversary of his birth. 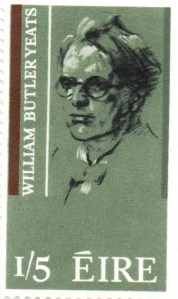 The centenary of the Dublin Lock Out, which saw a fierce and often violent dispute between the representatives of capital and labour, was marked by An Post with the issue of a new set of commemorative stamps last month.
It was not the first time, however, that a central figure in that event, James Larkin, had been honoured by a stamp. The charismatic union leader and founder of the ITGWU, who was born in Liverpool of Irish parents in 1876, appeared on a commemorative set in 1976. His organisational ability and oratorical powers brought him to prominence within the labour movement and into conflict with employers, notably the businessman William Martin Murphy. The Lock Out, which caused great suffering and division in Ireland, ended when near-starving workers were obliged to return to work.