Delighted to be co-operating with the wonderful North Mayo Heritage Centre on this exhibition which was opened on Saturday last. A great collection of fascinating artifacts on display, wonderful stories to explore and a lovely café for coffee and a bite to eat!

In 1959, the famous tea merchant, Twining’s of London, printed a series of 30 small cards measuring 1½ inches by 2¾ inches featuring illustrations of some of the world’s rarest stamps. Cigarette cards, showing actresses, sportsmen and other well-known figures, first appeared here in the late nineteenth century, issued by firms like Wills and John Player & Sons. They were used both as a form of advertising and as a means of strengthening the cigarette packet. The idea proved popular and all kinds of subjects featured on the cards over the following decades.

After the Second World War and the rationing of tea that was continued in its aftermath, the big British tea companies introduced tea cards as a way of marketing and re-introducing tea to the public in the early 1950s. Their market, of course, extended to Ireland where drinking tea was, until very recent years, much more popular than coffee. Considerable care was taken in the design and printing of the cards which were produced to a very high standard. The combination of colour and interesting snippets of information was a winning formula and the public collected cards to such an extent that the tea companies had to take on extra staff to deal with queries from those who wanted to buy missing cards to complete their collections!

Twining’s was set up in the early eighteenth century and its premises on London’s Strand is not far from the headquarters of the famous stamp dealer, Stanley Gibbons, which is also located on the Strand. Perhaps there was some co-operation between the two businesses for these tea cards encouraged stamp collecting. Instructions on the back of the cards read:

“Collect all 30 cards of the set. Cut off the bottom portions and return to above address with stamped addressed envelope for a free packet of selected foreign stamps.”

The series was devised by leading English stamp experts of the time, the Williams brothers, Norman and Maurice, whose knowledge of philately, especially its quirkier aspects, was immense. This particular series highlights some of the bizarre stories behind early stamp issues. Take a look at card No. 7, for instance. It shows Charles Connell, postmaster of New Brunswick in Canada, who decided to put his own portrait instead of Queen Victoria’s, on a 5 cent stamp in 1860. Such was the outrage generated that he had to resign and almost all of the stamps were destroyed.  The “Double Geneva” of 1843 is an interesting stamp because it was printed in two parts, half could be used for local Geneva post at 5 centimes or the whole, at 10 centimes, could be used for letters between Swiss cantons.

Finally, there is card No. 8 which has an Irish connection even though it is an 1854 stamp of Western Australia. The stamp shows a swan within a frame. During printing the frame was inverted and a few stamps were issued before the mistake was discovered. Known as the “inverted swan”, one of the very few known is in the National Museum’s collection in Dublin. It was discovered by a school boy in The High School Dublin and ended up being bought by the Duke of Leinster who left his wonderful stamp collection to the museum.

Now that’s it’s the 1st December, I suppose some discussion of Christmas is allowed! The Department of Posts & Telegraphs issued the country’s first special stamps for Christmas in 1971. Based on a design featuring a statue of the Madonna and Child in Lougrea cathedral, county Galway,  they can be judged successful I think.

The Travelling Post Office or TPO, as it was known within the Post Office, was a vital part of postal infrastructure in Ireland from 1855 until the last ones were taken out of service in 1994. Clerks would sort letters en route so that they would be ready, close to delivery order, by the time the train arrived at its destination. Bags of mail, moreover, would be taken on and offloaded by means of a special net and pole apparatus at points on the journey without the train having to stop. The system was remarkably efficient and the men who worked on the TPOs were experts in their knowledge of the postal system and Irish geography.

Having been in storage for many years, the last of our TPO carriages was moved last weekend to Downpatrick’s railway museum where it will be on loan from the Post Office to form, in due course, part of a display in the Downpatrick & County Down Railway’s exhibition. The ties between the Post Office and the railways in Ireland have been very strong over the last 150 years or so and it is nice to find an appreciative and fitting home for the last of these purpose-built Post Office carriages.

It is 99 years ago today since the mail boat, RMS Leinster, was sunk in the Irish Sea just a couple of weeks before the end of the Great War. More than 500 people lost their lives that day including 21 of the 22 Post Office staff on board making it one of the worst of Irish maritime disasters. The German U Boat which sank the ship was itself lost when it struck a mine on its way home and so further lives were lost.

Events in Ireland, as it moved towards independence, and a reluctance at official levels to dwell too much on the disaster after the end of the war meant that it was overlooked for many years but in recent times the tragedy has been remembered and the lives of those who died commemorated.

For stamps, letter boxes, postcards and even 500 years of the Reformation, visit the Irish national stamp show at Griffith College this weekend!

Advertising slogans added by the Post Office to letters as they are postmarked are interesting pieces of ephemera. This envelope, addressed to the Gouldings’s fertiliser company back in 1964, with its advice of “June for  your Irish holiday”, would have had it right for this year certainly! 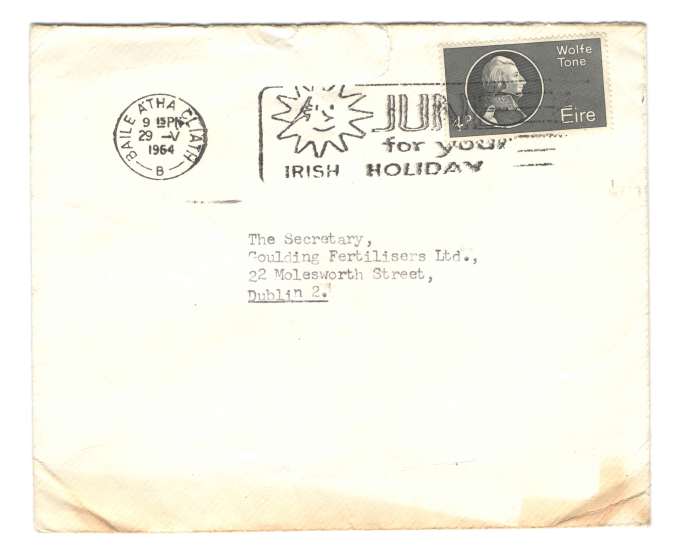 We couldn’t le the 16th June go by without a nod to James Joyce. Here he is on a 2004 Irish post office stamp. Did you know that a first edition of Ulysses, sent from Davy Byrne’s pub in Dublin, was impounded by the British Post Office under censorship laws? Curiously, the book wasn’t banned at that stage in Ireland! 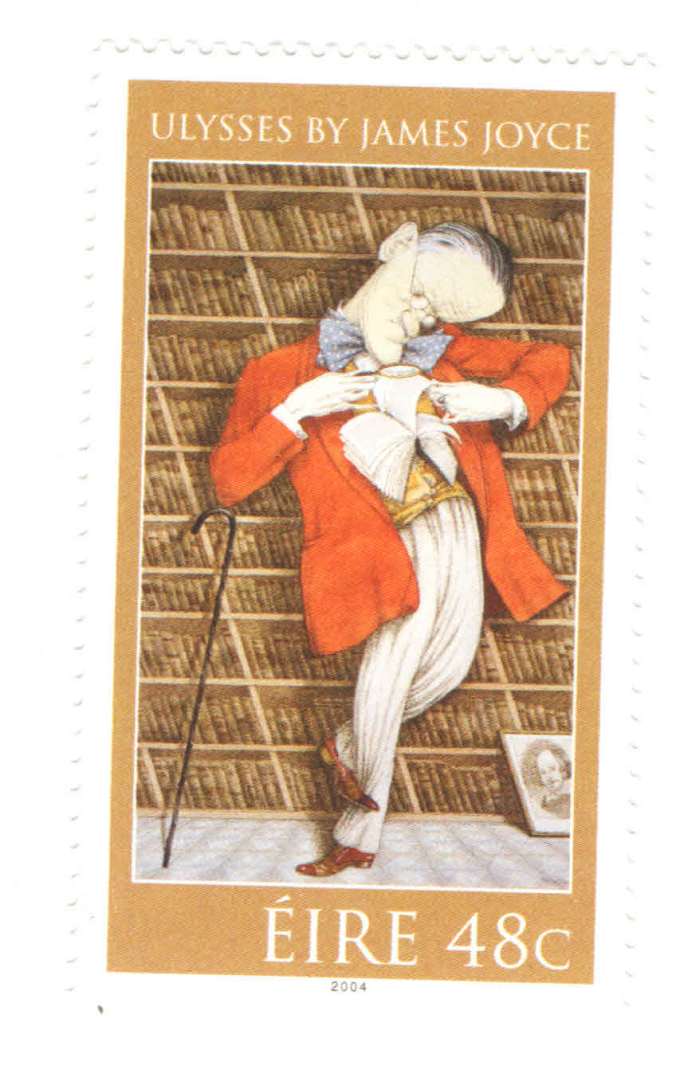 Issued by La Poste and kindly sent to me by a Breton friend, this stamp marks the 500th anniversary of the death of Anne of Brittany (Anna Vreizh), a wealthy and much pursued heiress who was twice queen consort of France. As the summer starts, many Irish people will take the boat to Cherbourg or Roscoff to enjoy their holidays in Brittany and sample the particular delights, history and traditions of that lovely part of France.

The annual Festival Interceltique, which takes place in Lorient in August, draws together some 700,000 people who wish to share the music, languages and customs of a heritage that unites the celtic peoples of western Europe. They might spare a thought for Anne of Brittany who, in choosing amongst her various political suitors, sought to preserve the independence of her native Brittany.

Finland marks this year the centenary of its independence, an event that has a strong resonance with Ireland’s 1916 commemoration last year. Finlandia, 2017, an international philatelic exhibition, has just taken place in the city of Tampere and this very well-organized occasion naturally focused on Finland’s history and philatelic treasures but there was a great deal of interest too to be found in the many high-class exhibits from around the world that examined so many different areas of philately and postal history. Congratulations to those whose exhibits were marked with particular success, not least the Irish contingent who did so well!

The Finnish postal museum, one of several very interesting museums housed in an old industrial building, had on show treasures from its own collection, including the 1856 5 and 10 kopek stamps, and also material on loan from Queen Elizabeth’s collection, including the Kirkcudbright Penny Black multiple cover. The opportunity to see some of the world’s greatest stamp rarities was relished by the many visitors who came to Tampere. The ride from the exhibition centre to the postal museum in an old Finnish postal bus was a nice treat for everyone too! 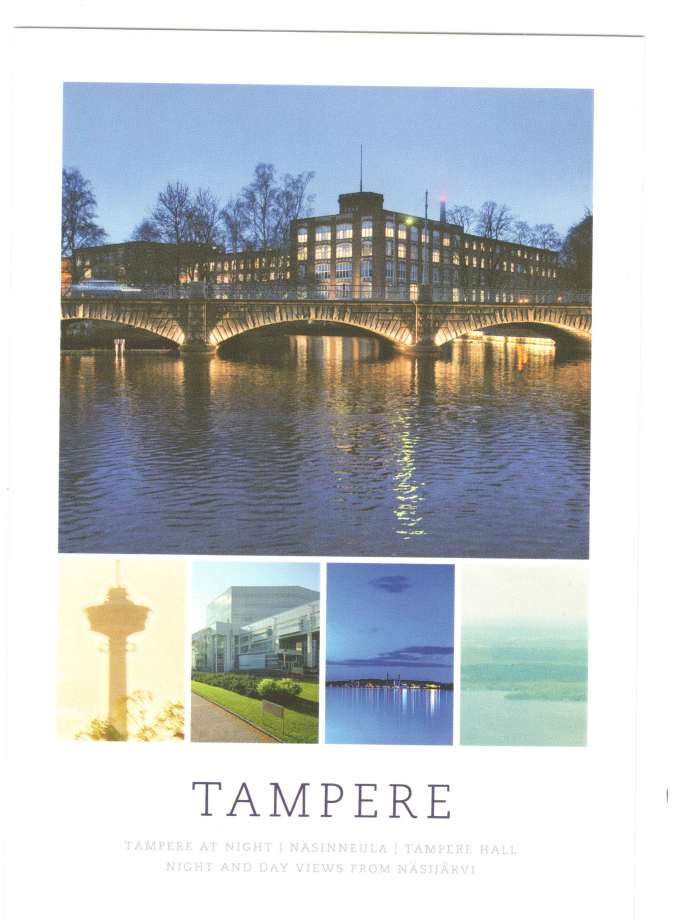